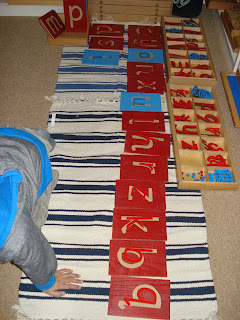 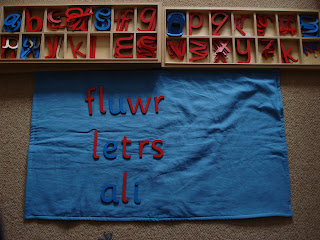 The child can choose any word, even if it is not phonetic. The child can then use the moveable alphabet to make the words starting from the beginning letter. If the child completed the I spy games they should be able to break the word down in to individual sounds. It does not matter if the child spells the words incorrectly, this activity is only for seeing how the moveable alphabet is used to make words.
In this example the child wrote, fluwr-flower, letrs-letters and Ali. Once the child has understood the concept of using the moveable alphabet letters to make words, they're then ready to start on a language series.
My next post will be about the language series that I use.
Posted by N from the Learning Ark at 09:05

Can't wait to see your next post on the language series you use.... everyone seems to have trained differently and I glean useful tips from everyone as i go..... my littlest has just begun to use her moveable alphabet this week so great timing! Thanks, Jen x

Great moveable alphabet work! Hope that you will pop by my blog, Sunrise Learning Lab, to enter an awesome $2500 Montessori prize pack! You have to enter as teams for this. http://bit.ly/junwPM
Plus, doing a Twitter party May 25 from 7-9 pm. Follow #montecamp
Gonna be fun!
Have a nice week! Colleen:)

It seems like the uses for the moveable alphabet are endless, doesn't it? So nice to meet another Montessori momma! Have a great weekend.

Nice post!!!! I just can't wait to read your next posts!!