After telling the first great lesson each year, the most loved follow up work is always the volcano activities. Here are some ideas I use in my class and my children enjoy.

Firstly, I always have two volcanoes on display. One is my grand big brilliant volcano which I use for lessons. The second is a much smaller one which children can use independently. The children are able to take out the smaller volcano anytime and follow the instructions to make it erupt. 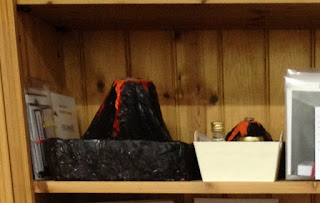 The main volcano in the picture shows my large grand one. Just behind the white box you can see the top of a smaller volcano.

In the white tray I have a supply of vinegar and baking soda. The children use a spatula to fill the volcano with baking soda and a pipette to add the vinegar. This way they don't use to much of the ingredients at once.

As you can probably tell from the photos, these volcanoes are handmade. Both volcanoes have removable bottles which make them easy to clean. I used this youtube video, but did not follow the exact instruction.

Montessori Beginnings has another good tutorial on how to make a volcano.

Each of these volcanoes has a built in tray which holds the lava and mess from the eruption. This has been perfect for avoiding the terrible disasters I previously had when the volcanoes stands in a separate tray. 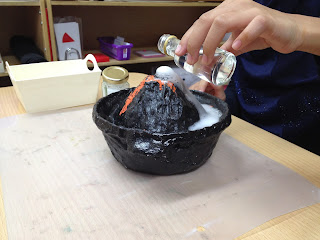 Parts of a Volcano

Alongside the volcanoes, children will work with the part of the volcano cards. I have a set available at my store, shown below and available here. 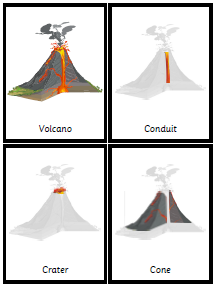 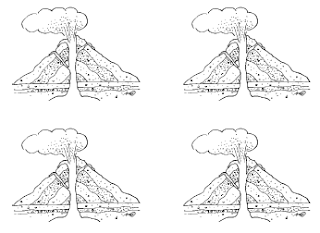 Alongside the volcano cards, the children use the above printout to make their own volcano booklet. This is available for free here. The picture of the volcano was taken from Free Colouring Pages.

Of course the volcanoes make appearances in various other lessons. Below, I was presenting a lesson on the use of a comma and a child decided that the volcano was the perfect prop to use. 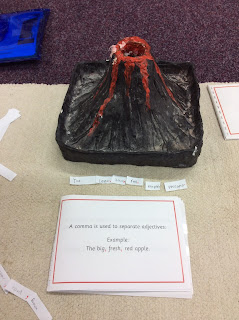 I used this great chart to make three part cards for types of volcanoes. I am not sure who is the author of the chart so I can't share the cards. The chart is available here.

It is also great fun for the children to look at real volcanoes. 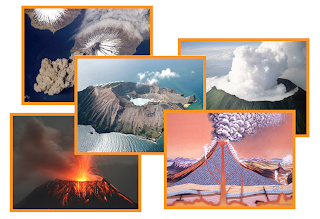 Helpful garden has a free download for pictures of volcanoes. 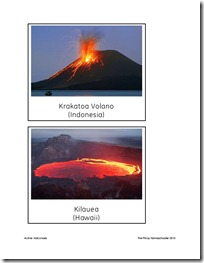 Pinay Homeschooler has a free set of volcano cards from around the world.

For children who have a great interest in volcanoes, I encourage them to carry out research on an actual volcano. The below picture shows research guidelines which the children use as a basis of their research. Unfortunately, I can't remember where the pictures came from so I can't share this. Sorry! 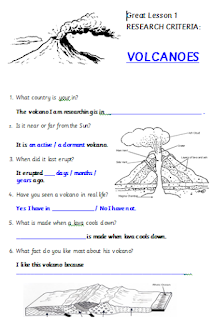 Of course, making a volcano is the ultimate volcano activity children love. Making a clay or papermache volcano is always nice but can get a bit messy. Here are some great paper volcanoes I found online. Canon have a print out for Mt. Fuji. This model is beautiful!

Another activity is to make a map of active volcanoes. I provide the children with a blank world map and some good books on volcanoes, as well as the above chart (found on wikipedia). The children make their own charts and discuss where it may not be safe to live!

I am sure there are many more things which can be done about volcanoes. If you have anymore ideas please let me know.
Posted by N from the Learning Ark at 14:42

Great stuff, thanks for sharing! A good picture book to go with these activities would be Volcano Rising by Elizabeth Rusch. Our favorite part of the book introduced the story of Paricutin, which is a small village in Mexico where an eruption occurred in a cornfield in 1943. This created a volcano that eventually reached 1,353 feet above the surrounding fields.