School has finished for the year and we ended it in style with a child lead party.
As this was the first year we had a 6-9 class everyone was watching us closely, and even closer as the year came to an end. It was expected that my class does something really special for the end of year party, I spent ages thinking of ideas and even ask for help here.
Then I realised that I didn't need to do any planning, I have a class full of bright and imaginative children, so I left it up to them to decide what they wanted to do. 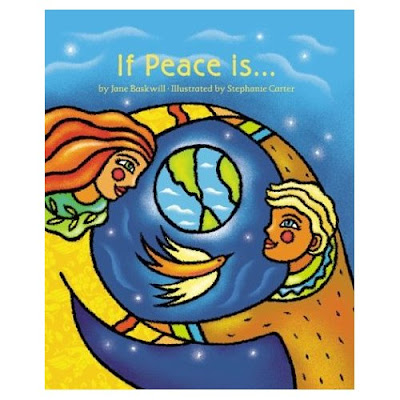 They loved the 'If peace is...' book and they quickly planned who would say what and how. They recited this as a poem and some of the children had props. I was amazed at the little details they put in. The only thing I needed to do as a teacher was help them bring their ideas all together. Many thanks to Annicles for suggesting the book. 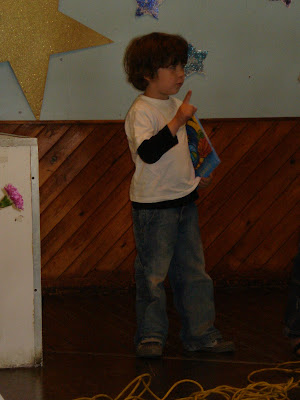 Here is Little-N saying his line in the poem, I still can't believe he had the courage to say his part infront of all the parents!!
They also preformed a play that was based on a story they wrote called 'The parachute'. This was my classes version of 'Not now Bernard', but with a twist. Basically it's about a monster that came to school and went to each teacher, biting her leg or slapping her back, none of the teachers noticed it was a monster and continued working. The story ends with 'The monster stood up on a chair and shouted I'm a monster. Everyone screamed! Then the primary children came and killed the monster. The primary [6-9 class] children then gave the monster to Ms N to put under the microscope. The next day two children were looking at the monster and his eyes opened....' 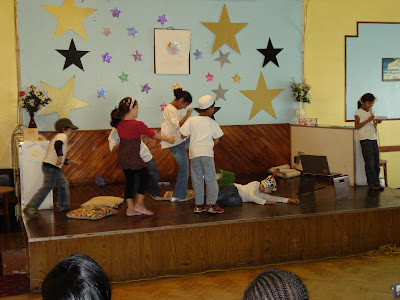 This is the scene when the children were killing the monster after he trashed the stage. 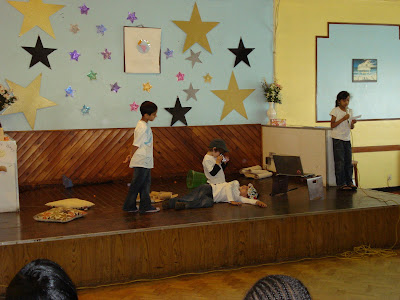 Here is Little-N acting 'Ms N' and looking at the monster under a microscope.
Posted by N from the Learning Ark at 14:28

I am so happy your children loved that book too. We used it in a very similar way back in october and our children still love to remember their part or to say it all the way through.
I love the cliff hangar at the end of the children's play!!!