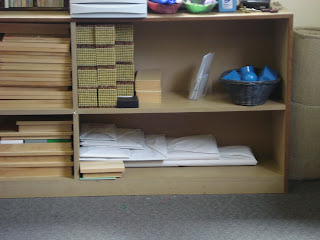 I never thought I'd say this, but very sadly my class closed today. It hasn't sunk in yet, I feel broken. My class is packed up. Things started to go wrong a couple of months ago, problems with the head and her daughter. The 6-9 class was a trial, but I never imagined it would end so quick. I tried so hard to make things work, I put my heart and soul into the school. I think I was probably the only person taking it so seriously and now its gone. On Monday this week I had no idea the class was closing just yet, but on Wednesday the decision was made to close by the end of the week. When I started the school, I was warned not to do so too much for it, but being the way I am I had to do all the extras. I now know my lesson that I will only put so much effort into my OWN school, when I know its there for good.
The Montessori method was perfect for the children and benefited all of them. However the school building was to small to accommodate for the needs of the older children. Some of the children I taught this year will continue with me and the rest will be going into mainstream. Those who are staying on, are committed to the Montessori method.
My plan is to set up my own home-schooling support centre, where I have children coming for 4 days a week and evening session for home-schooling parents who want advice on using Montessori. I'm excited, but sore. I have one week to set up another class at home for those children I am teaching. I'll keep you informed on my progress.
Posted by N from the Learning Ark at 22:01 11 comments:

Posted by N from the Learning Ark at 19:28 No comments:

From tadpole to frog 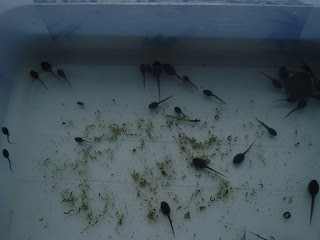 Three weeks ago I was given 38 tadpoles from a friend's pond. I took them into school for the children to watch them grow, but soon fell in love with these creatures and decided to keep some at home for me and Little-N to enjoy. 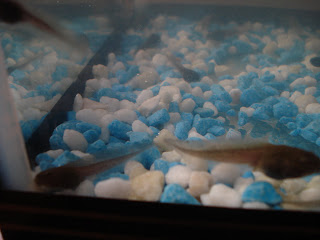 I put them in a fish tank with some pretty stones on the bottom and it was wonderful to watch them swim about. 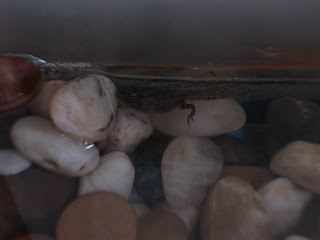 Much to my surprise, they changed so quickly growing their back legs within a week of having them. In the photo above you can see a tadpole resting on the rocks with tiny hind legs. 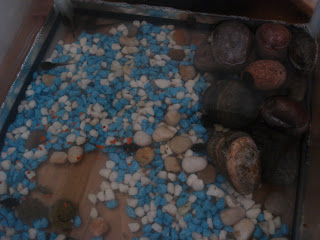 I put in quite a few rocks for them to climb on. Cleaning the tank took ages. 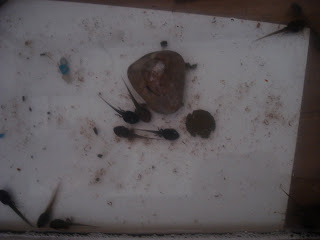 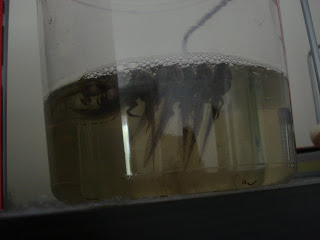 Soon they grew their front legs too and we got so excited. I didn't really know what to do once they turn into frogs, so I kept them in a water filled tank with rocks, but sadly I found two frogs drowned when I returned from work. I removed all the tadpoles from the fish tank, placed them in a plastic tub and turned the fish tank into a terrarium with bark, rocks, branches and a bowl of water. I moved all the froglets with front legs into the water bowl in terrarium. 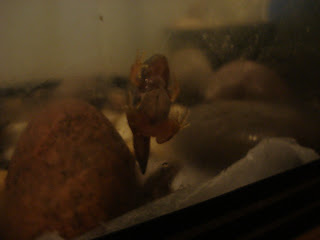 The froglet's tails disappeared quickly. The children at school collected aphids to feed them. 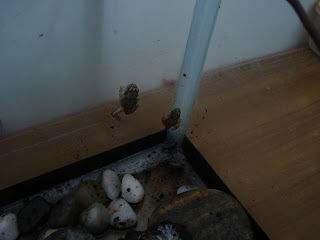 Soon their tails disappeared completely and they started climbing the walls of the tank. I think they're common British frogs. 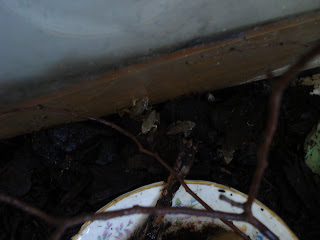 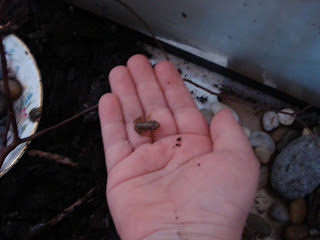 Their so interesting to watch. At the moment we have 18 frogs/froglets in the terrarium and 7 tadpoles still changing in the tub. We have ten other tadpoles in a tub at school, interestingly they haven't developed as fast. I don't plan to keep all of them, I will return most to their pond, however I'm looking into the care of frogs to see whether we can keep two of them as pets for a while.
Posted by N from the Learning Ark at 19:34 4 comments:

Wow I just noticed that I now have 60 followers! I can't believe it, I never thought I'd have so many people reading my blog.
I'm sorry I haven't blogged lately, I have so much to write about. But with a six year old son, materials to make for school, degree level essays to write, a new man in my life and health problems arising [due to the busy-ness and stress], I can't find any time to blog.
I will finish my foundation degree course in the end of June and hopefully then I will start blogging regularly.
In the meantime, a big thank you to everyone who reads my blog.
Posted by N from the Learning Ark at 20:12 3 comments:

Jo at A Bit Of This and A Bit Of That has started this fantastic blog which brings together loads of great posts from fantastic Montessori blogs.
It's such a great idea! I advise all Montessori teachers and home-schoolers to take a look.
Thank you Jo :)
Posted by N from the Learning Ark at 20:00 No comments: 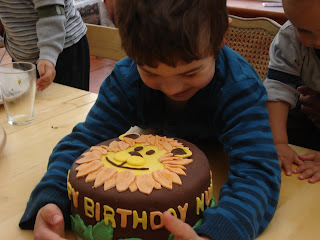 Little-N was six two weeks ago. I can't believe how fast the time has gone and how quickly he is growing up. He's already started on Montessori's second plane of development and I can see the changes. It's exciting, but worrying as more demanding issues arise and I have to figure out the right way to handle it [sometimes I fail dreadfully]. He's a lovely intelligent boy, but as with all he has his ups and downs. He's changing so quick and I thought it might be a good to document his achievements here, so that next year I can look back and see the difference.
Little-N loves to:
Reading 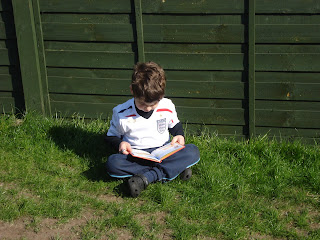 He loves reading. Everywhere we go he finds himself a book and sits in the corner reading. He enjoys reading chapter books and prefers to read them alone. He'll read a minimum of two hours a day and a lot more on the weekend or holidays. He loves Roald Dahl's books. He spends most of his time reading an encyclopedia or facts books. He spends ages reading all about knights, dragons, sharks, lions, history and has a special fascination with fierce animals. Lately we started quizzing him about the things he reads and its amazing how much he knows :)
TV and computer games
I have no TV at home and he doesn't go on my laptop. I made this decision years ago when I saw the effect of TV and games on other children. He may occasionally watch a DVD at a friends house, but it can't just be anything. He knows how to use WORD but I tend to keep him away from it until his writing skills are better. Because there is no TV/games, he reads a lot, plays with lego and makes things. I plan to keep him away from TV/games for as long as possible.
Mathematics 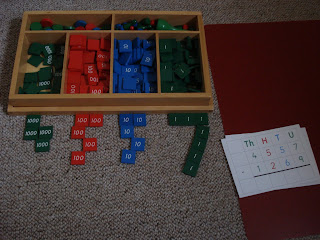 [Here he has placed the stamps in the shape of the numbers]
Little-N is one of those children born with a mathematical mind. He is constantly working things out and reasoning with numbers. So far he is able to do 4 digit complex additions and subtraction sums without any help. He can count in 2s, 3s, 5s, and 10s and can work out the rest if he needs to. He understands multiplication and division well and will work out sums in his head. He likes geometry and has a good understanding of shapes and patterns.
Science:
If you have a question, ask Little-N, he either knows the answer or knows where to look. One of the best things I ever did was show him how to use an encyclopedia.
Writing and spelling:
This is where Little-N is struggling. His writing is a mess and his spelling is hilarious. He just isn't bothered with getting it right. As far as he is concerned if it makes sense to him then it's okay. I hope that the following months will see improvement in these areas.
Physical skills:
Little-N has good fine motor skills, he draws very detailed pictures, can sew, tie bows... BUT... he seems to have a problem with gross motor activities like climbing up a climbing frame and running fast. There are three reasons for this, one he'd rather sit and read and two he isn't bothered if he looses a race and three he has a huge fear of falling and getting hurt. Something we're trying to work on.
Social
Socially he's great with everyone. He has good self control and manners. He's been hit a couple of times and his reply is 'I am not going to hit you back, its not good to hurt people, GOD will deal with this.' He's not a wimp but he just doesn't see the point of having a fight. I'm really proud of that!!! It's important to me that he doesn't copy bad behaviour. 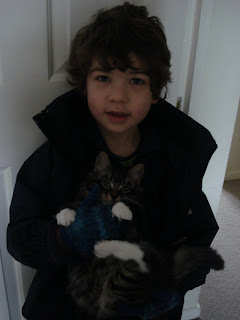 There are things he is great at and things he needs work on. The beauty of the Montessori method is that he never feels failure even when he is doing bad at something. He always has support to further his development in each area, without being held back or pushed forwards. I'm glad I chose Montessori for him, its definitely been the best.
Posted by N from the Learning Ark at 18:12 4 comments: