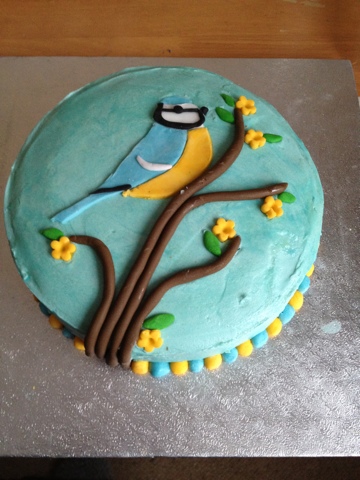 Today Little-N turned eight and of course we had to celebrate with a bird themed cake.
Posted by N from the Learning Ark at 20:53 5 comments:

When we first opened our Montessori school in September we had one big classroom catering for children aged 3-6 years. I presented new activities to the 5/6 year old children and another teacher presented to the 4/5 year old children. This was a big change for me as I have been working in a Montessori elementary classroom for three years and preferred working with some of the 9+ children I taught. Going back to the younger classroom has been very interesting and allowed me to view the Montessori continuum through different eyes. I have also been warmed by the loving relationships and bonding that happens with the littlest of the children who joined us.

At the start of the year I hoped that Little-N [aged seven] would have settled in the 3-6yrs classroom and found his place. I set  up his own work area towards the back of the classroom. However he ended up staying out of the classroom, sitting at the back by himself for the majority of the time. He was a bit of a loner usually spending the whole day doing his own thing hidden from the classroom. As the second term progressed it was clear that most of the six year olds were ready to move into a separate environment. We were not ready to formally separate the ages till the end of the year. I wanted the younger children to have full benefit from observing the older children working and I also wanted the older children to benefit for the responsibilities and help that they provided for the younger children. This worked for a good 6 months, however the six year olds reached a point where they needed separation, they needed their own space to focus and do more intensive activities.

Today I have 10 children in my elementary classroom, Little-N who is eight next week, a boy who is turning seven in a few weeks, 4 six year old children and 4 children who will be turning six in the next month or two.
All the children are part-time except one child. Most children attend between 3-4 days a week and many are homeschooled on the other days. I present new activities to the children and work with them individually and in groups. I also have an assistant who oversees the classroom making sure everything is running smoothly and guides the children when needed. I teach in the elementary classroom Monday - Thursday and only have two children on Friday so that I can spend the day focused on managerial work and mentoring teachers in the younger classroom.


The elementary classroom is set up with minimal materials but has a lot more space and resources than I had in the previous Montessori school I worked in. New materials and activities are added to the classroom daily and it has been amazing to see how my classrooms have changed over the last three years. In my previous I felt like I had so much and was adding more here and there. Today with all the materials I have I still feel like I have so much more to add. Every child I have taught has inspired new activities and allowed me to improve and change some of the previous activities. Little-N studies the material at depth and this has made me look deeply at each elementary activity and ensure that everything he needs for his deep studies is available. My classroom is functional but no where near finished so I will not be posting pictures yet.
Posted by N from the Learning Ark at 21:41 3 comments:

I love geometry and love to share my love of it with the children I work with. Below are a few photographs of group activities about pentagons. Some of these activities were inspired by work I saw on The Moveable Alphabet. 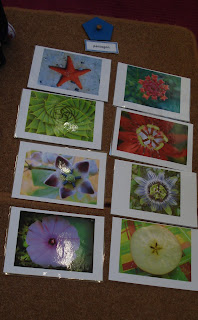 Looking at photographs of pentagons found in nature. 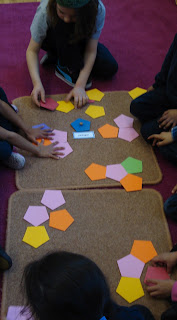 Each child used a few pentagons to make patterns. 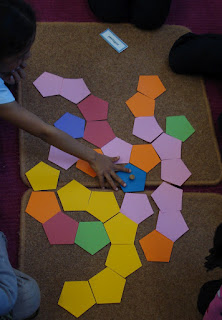 The children took turns to place pentagons on this pattern.

After the group I set this activity up on the shelf so that the children can take the pentagons out themselves and create their own patterns.
I have a few more pentagon activities that I will be doing with the children after Easter.

Posted by N from the Learning Ark at 15:25 No comments:

Little-N loves origami. He has worked on some basic models and folds over the years. This year he has taken origami to another level and is now creating his own models. Below is a swan model that he made up. 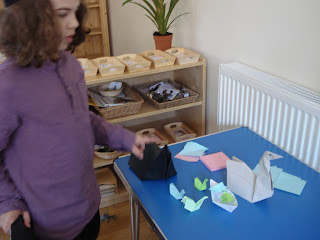 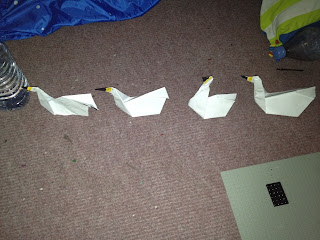 A row of Little-Ns swans in his room. 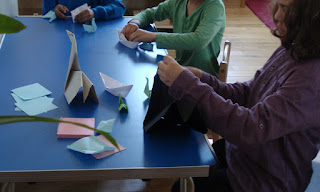 Little-N showing some of his friends how to make his origami swan.
Posted by N from the Learning Ark at 14:35 1 comment: 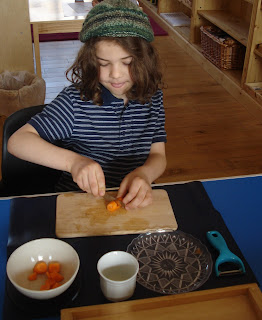 Little-N enjoys cooking and preparing food. I noticed that he didn't peel vegetables properly so I reintroduced him to the carrot peeling activity.
Posted by N from the Learning Ark at 14:29 No comments:

Eight months later and Little-N is still obsessed with birds. At the moment Little-N is interested in passerines ; perching birds. He can identify many local birds and will identify the hidden birds by their songs and flight pattern. As usual he spends plenty of time drawing birds and making his own little bird books. Here are a few recent pictures of Little-N working on his bird books. 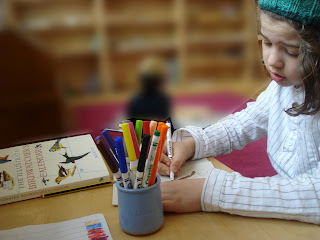 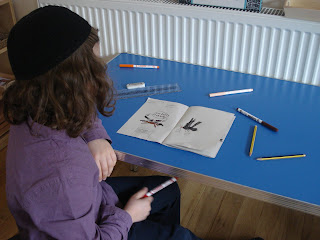 Posted by N from the Learning Ark at 15:04 No comments:

Parts of The Line

Little-N has been working with line activities in the geometry curriculum. Below is the first activity where he learns the names of the different parts of the line: origin, ray, endpoint, line segment. 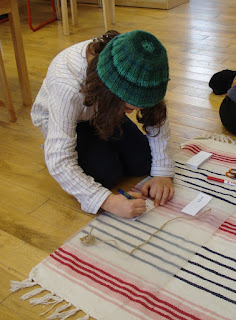 Here he uses a string to represent the line and labels the parts. 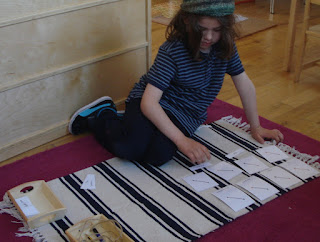 Here Little-N is using the parts of the line cards.
Posted by N from the Learning Ark at 14:24 2 comments:

Here is Little-N working with a geometry activity. The golden beads are used to represent a point, line, surface and solid. 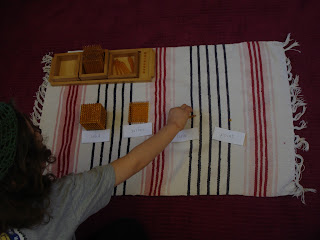 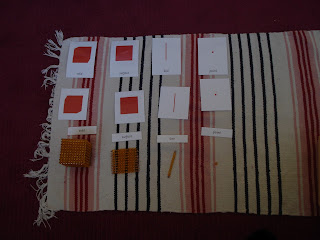 Little-N has worked with the stamp game and small bead frame for years and can already work out long addition and subtraction sums without using materials.  Recently I've been preparing him for multiplication on the small and large bead frame. To prepare him he has revised the following activities. 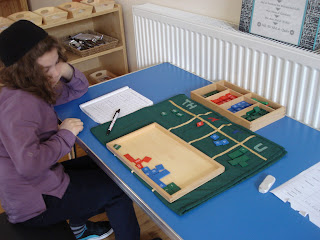 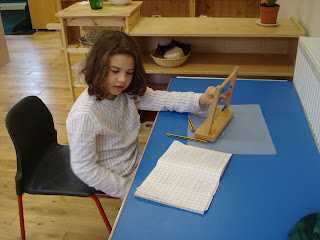 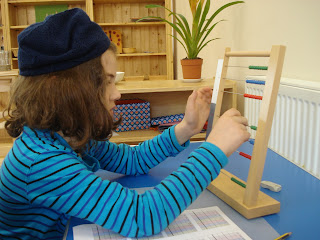 Addition and subtractions with millions using the large bead frame.

Little-N worked on these activities well, soon I will be introducing him to multiplication with the bead frames and checker board.
Posted by N from the Learning Ark at 14:13 2 comments: