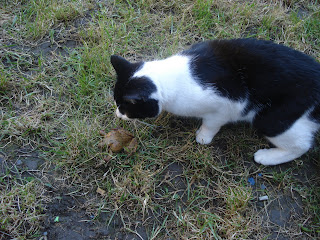 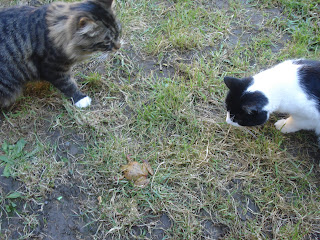 The other day my cats were acting strangely in the garden, it looked as if they were chasing a beetle or something. After a little while my cat Olly ran into the garden with something large hanging from his mouth. Initially I thought he'd caught a mouse. He dropped it on the floor and in front of him was a huge frog. He picked it up again and started to run away from me and the frog screamed!!! I managed to stop Olly and he dropped the frog. Before I could get there, we had a frog playing dead on the grass and 4 cats ready to pounce on it. 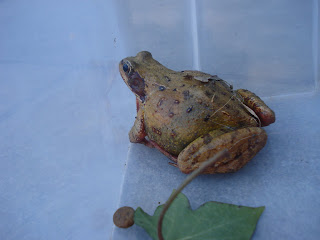 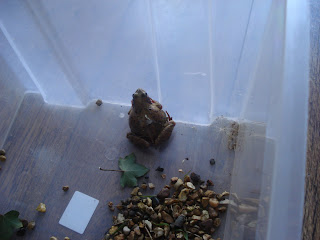 I managed to shoo the cats away and Little-N went looking for a box. We picked up the frog [using a spade] and it started hoping again. Little-N was delighted. We bought it indoors for safety and observation. Little-N looked up and found out that is was a British common frog, just like the frogs we raised last year, but this was much much much larger. We kept it for a few hours, in which Little-N decided to do a research paper on him. We later released him safely in a relatives garden [with a frog pond] far away from my cats.
Posted by N from the Learning Ark at 21:24

We have a pond and the cats would catch frogs every now and then. Sometimes they would become paraplegic frogs!