Some of my homeschooling friends have been asking me about the presentation of the sandpaper letters. I had a look online for videos or instructions but I am not very happy with what I found out there. I can't find an accurate presentation and it's crucial that the sandpaper letters are used correctly. I am sure that there are some good instructions out there, but I just couldn't find them.
The Sandpaper letters are taught using the three period lesson. You can find information about the three period lesson here and here. It is very important as a teacher or homeschooler to master the three period lesson as it is such an important teaching tool and is use throughout the Montessori method in all the different areas.
Before you begin:
The sandpaper letters should be presented after the child has worked with the 'I spy game' this will insure that the child already has some understanding of the relationship between sounds and a word. To begin presenting the sandpaper letters you must choose 2-3 letters that look very different and sound very different. I usually take the first letter of the child's name and another very different letter. The teacher/mum must sit on the child's right and this activity should be done at a table as we are indirectly preparing the child for writing later on.
Depending on the child you may want to begin by saying something like ''Remember we enjoyed working with the I spy game finding which objects begin with the different sounds? I would like to show you how we write these sounds.''. You do not have to say this, but I find that this helps the child to better understand what the letter symbols are. The child already knows about sounds, they can produce them, hear them and isolate the sound in a word, the only new thing with the sandpaper letters is recognising the symbols and associating them with the sounds.
The First Period 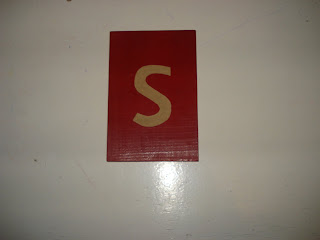 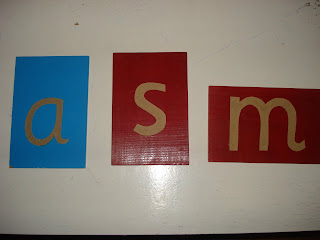 Usually we start the second period straight after the first, however if the child is struggling or has lost interest leave it for another day. Place the three letters in front of the child naming them as we place them. Then ask the child ''Can you feel 's'?', then ''Can you feel 'a'?' and then 'Can you feel 'm'?'. Next you should change the command, I have written a small list of different commands that can be used with the three period lesson.
-Can you feel
-Can you point to
-Can you hold
-Can you give me
-Can you put '' on the table
-Can you put '' in the basket
-Can you put '' here
-Can you point and say ''
-Can you feel and say ''
Choose one command and do it for the three letters. i.e. Can you give me 's'? can you give me 'm'? can you give me 'a'?. Then choose another command and do the same. Continue until you are sure that the child knows the letters. In this period we are providing the child with the sound of the letters and allowing the child to associate the sound to the letter. We are NOT asking the child for the sound of a letter or asking the child to name the letter, all the child has to do for now is associate the sound and letter symbol.
If the child makes a mistake in this period...
I have said 'Can you feel 's'?'' and the child felt 'm' instead. I will simple say 'This is 'm' while pointing to 'm' and then say 'can you feel 's'?. This way I am not saying no or making the child feel that they have failed. I am also giving the child the sound for the letter they picked incorrectly and asking them to find the 's'.
You should continue with the second period until you are SURE the child knows the letters. This period is long. Make sure that you give the child plenty of opportunity to feel and say the sound [repeating after you] in this period.
My own style of ending the second period is to ask the child to feel and turn over each letter. This way no letters are showing so when I come to the third period I just turn over the letters...
The Third Period
Usually I start with this period by saying 'Do you think you can tell me what these letters are?' Point to a letter [or turn over a letter if you have placed them face down] and ask the child to name and feel it. If period one and two were done correctly the child should be able to do this no problem. Do the same for the second and third letter.
After the 3-period lesson
If the child was successful with recalling the sounds for the letters then the next step is to take one letter i.e 's' and ask what begins with 's'. Help the child to name some words that begin with 's' [snake, sun, strawberries]. Do the same for the other letters. Once you have done this the activity has finished.
I hope to write a few posts about activities that can be done after the sandpaper letters.
A few tips
-Always start with the first period even if you are returning to this activity.
-Make sure the child feels and says the letter sounds at the same time.
-Make sure the child is producing the letter sounds correctly. The letters should be said as 'mm' and not 'maa'.
-Each time you present this activity start by reviewing all the letters the child has taken previously and then do the three period lesson for the new letters. If the child forgot some letters do a three period with those letters. To review the letters simple point at the letter and ask the child if they can remember the sound for the letter and feel it. If the child can't remember then ask him to feel the letter. Feeling the letter will activate the child's kinaesthetic memory and may help the child remember the sound.
-A master Montessori teacher once told me that to make sure the child does succeed always start each new period with the letter that was last used in the previous period. This way the child has that letter sound fresh in their mind and will be able to recall it with ease.
You can use this description of the three period lesson to teach new language or concepts.
If you have any questions please ask me and I will answer it as soon as possible.
Posted by N from the Learning Ark at 10:09

PS I have a little blog award for you here:
http://leptir-mojpribor.blogspot.com/2010/12/award-your-blog-is-fabulous.html

Jessie, The Education Of Ours said...

This is a perfect explanation of this lesson. It's easy to follow, you have provided many with the ability to do this with their child. Lovely blog!

Thank you so much for sharing your knowledge and experience in such an easy to read way. I am homeschooling my son, Montessori inspired, and am learning as much as I can about Montessori method. Your site is fantastic! Thank you!

I am new to Montessori and I am probably jumping in too fast, but is there a guideline as to which order to teach the sounds? Also, what about vowels and consonants that have multiple sounds? If anyone can point me in a direction to find answers to questions like this I would be so grateful!!

I am new to Montessori and I am probably jumping in too fast, but is there a guideline as to which order to teach the sounds? Also, what about vowels and consonants that have multiple sounds? If anyone can point me in a direction to find answers to questions like this I would be so grateful!!