Practice with his letter writing 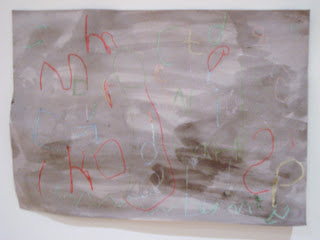 Little-N has been doing really good in all his areas of learning. The only thing he's not doing so good on his his writing! I'm not bothered tho, I know he'll do great at the right time and perhaps it hasn't come yet. He'll write something when he wants, but he isn't interested in writing the letters with the correct formation. So Today i wanted to see where he is with his writing. I got him to write all his letters [from mind] with colourful crayons. 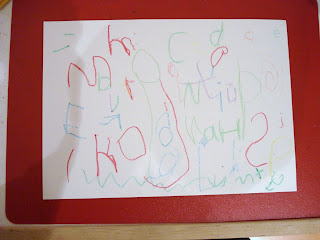 He can write most of them in his own sort of way, but for someone who is 4.5yrs some parents and teachers might be worried [Lucky for him I'm not! he does so many other things I can't expect anymore]. After he wrote them we painted over them with black water colours. This idea was adapted from one of nopinkhere's ideas for a sun picture.

when I was teaching ESL some of my students found it hard work using a pencil so we did lots of 'finger' writing using shaving foam or try steaming up a mirror.
Also, writing in lemon juice then when it is dry warm the paper (carefully) under the grill to get the secret message. Would work with white crayon and a water colour wash too.

thanks for leaving a comment, I am on a mission this week....

I hope Little N had fun with my idea. I'm tickled that you tried it. I don't really have any suggestions about the writing . . my son's not to that point yet.

have you looked at the handwriting without tears curriculum? www.hwtears.com It's been fun for us.

'finger' writing is great!Can try writing in paint too,

Model writing(i'm sure you do anyway)but out loud 'what do I need to write on my shopping list can you help?'

Interesting writing paper,choose theme he likes,rockets,cars decorate the border-send a card to a cousin:)!oh the joy on a child's face seeing you actually post their attempts....

I found they prefer chalk board or white board to paper when they begin,suppose less worried about it not looking 'correct' they can just wipe it out

The time WILL come as you said,he's enjoying learning about everything and that's what's important
sorry for all the waffle!
take care!